Happy Halloween! Sony has announced and revealed a remake of the PS1 classic MediEvil for the PlayStation 4, due for release on October 25th, 2019. As you can see in the trailer below, it's looking absolutely amazing already and we can't wait to play it!

MediEvil is a hack and slash action game that was originally released on the Sony PlayStation in October of 1998. It was a flawed but fun game with a memorable and endearing main character and charming art design heavily influenced by Tim Burton's The Nightmare Before Christmas. The game was previously remade for the PSP back in 2005, but even in its early state the new remake is looking like it will be a much better game.

News on the PlayStation Classic front! Sony has unveiled all of the 20 games that will come pre-installed with the system when it's released worldwide on December 3rd, 2018.

Here's the list of games that will be included with the PlayStation Classic in North America and Europe (as well as Korea and southeast Asia): 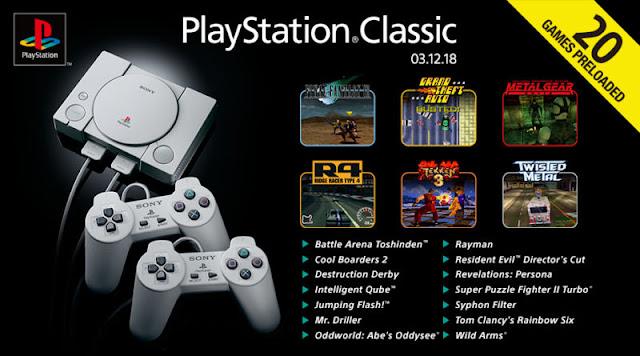 The full list of games included with the PlayStation Classic includes some great iconic titles like Twisted Metal, Final Fantasy VII, and Resident Evil, along with a few, umm... Oddball choices. Still, it looks like a pretty solid list of games.


Buy the PlayStation Classic at Amazon.com

Meanwhile, the list of games included with the Playstation Classic in Japan, Hong Kong, and Taiwan has a slightly different library of pre-loaded games:

The Super Nintendo Classic will feature all 21 of the following games: 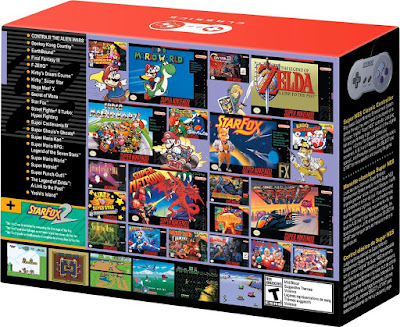 Looks like a great collection of some of the best classic Super Nintendo hits. Earthbound alone makes this worth the price of admission, and it's awesome to see Star Fox 2 get its first official release over 20 years after being cancelled.


Buy The Super Nintendo Classic on Amazon.com!
at October 05, 2018 No comments: