That's right, Ulala is back! Sega has announced that the beloved series from the Dreamcast is being resurrected for VR platforms as Space Channel 5 VR: Kinda Funky News Flash, scheduled for release in the US sometime in 2019 for the Sony PlayStation 4's PlayStation VR and the HTC Vive for PC, just in time for the 20th anniversary of the original game. Being billed as a "funky dancing simulator", there's no word yet on whether it'll be a remake or a completely new game, or whether Space Michael will reprise his role in the wake of his namesake's recent controversy. We'll update this post when we know more.

If for some reason you're unfamiliar with the series, Space Channel 5 began it's life as an exclusive rhythm game for the Dreamcast released in 1999 in Japan and later in the year 2000 in the US and Europe. The game became an instant cult classic and Ulala is one of the console's most iconic and recognizable characters. It receieved a sequel in 2001 and games from the series were later brought to the PlayStation 2 and Game Boy Advance. If you haven't played the original Space Channel 5 you should definitely look to change that - it's cheap and incredibly charming. 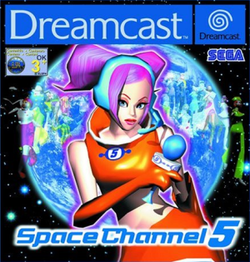